My Research  Analysis for Narendra Modi and BJP  For Rise and Fall  using the  Saturn Transit In Libra, Sagittarius and Capricorn signs . In this Article I have discussed the Foundation chart of the BJP, Muhurta Charts of the Time of Start and the 11th March 2022  when Elections results will be declared along with Solar Ingress in Capricorn  and given my final analysis for the Predictions. I have tried to  study by every possible methods in the absence of the Authentic charts of the Politicians  who  could become the Chief Minister of UP . 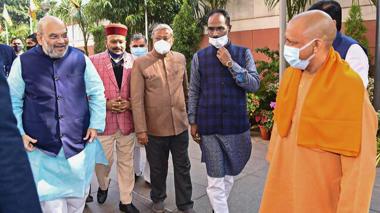 There will be more such happenings till the 19th Jan  and 30th Jan. 2022 since the Mars 7th and the 12th Lord of Conspiracy  with Ketu over the Natal Ketu in the India Foundation chart and  Lagna Lord Venus in Retrogression respectively.

The Charts of the Politicians are not authentic  and we are left with the Event chart  and the Foundation chart of the BJP which are weak in the present scenario. Neither the Lagna Lord and the 7th Lord are placed well on the 10th Feb. 2022 at 8-00 am, although the Lagna Lord is placed in the 12th house in own sign signifies some gain only and not full fledged win. The Lagna Lord is stronger then the 7th Lord Sun so some good for the Ruling Party but with losses also and may not come in power with a sweep.The Lagna Lord Saturn in the Leo navamsha is not good either.

BJP Dasha as per the Foundation chart of the 6th April 1980 11-45 hrs New Delhi of the Gemini Ascendant and the Dasha of Moon-Jupiter both marka planets are reducing the shine of BJP . Moon Debilitated in the 6th house and Jupiter as the Kendra Lord is deep affliction will behave like a mad elephant till July 2022. Moon -Saturn Dasha from the July 2022 will add fuel to the fire since Saturn is also strong marak since fallen  retrograde and also under deep affliction. In Transit Saturn will also be fallen state from the 12th July to 23rd Oct. 2022 and then till 18th Jan 2023 it will be fallen and Direct. This time frame will bring anguish and pain in the Party and damage in terms of the image , name and fame.

THE TIME FRAME WHEN ELECTIONS WILL BE HELD AND THE RESULTS WILL BE ANNOUNCED THIS CHART DOES NOT BESTOW GOOD RESULTS  FOR WIN. PD OF MOON WHO IS DEBILITATED IN THE 6TH HOUSE  IS NOT GOOD AND THE DASHA IN OPERATION MOON-JUPITER-MOON. BIPIN RAWAT DIED IN HELICOPTER CRASH ON THE 8TH DEC. IN THE MARAK DASHA OF MOON-JUPITER ONLY.

MANY LEADERS OF THE BJP MAY LEAVE THE PARTY ALSO DUE TO MARAK COMBINATIONS DASHA OF MOON-JUPITER  AND A LOSS TO THE PARTY. AFTER THE DASHA OF MOON STARTED BJP LOST 2 OF THEIR IMPORTANT LEADERS ALREADY.

As per my research Saturn has been instrumental to give Modi a Pedestal of the Prime Minister after the down fall of the Congress which started from the assassination of Indira Gandhi on the 31st Oct. 1984 090-20 hrs when she was assassinated and Saturn was at 24-06 degrees in Libra. After the cycle of 30 years of Saturn when it came back over the Sign Libra and when it was in Retrogression at the same degrees 24.47 it Brought N Modi on the Pedestal of the Prime Ministership . Again when Saturn was in the sign Sagittarius at 25 degrees It brought back Modi in Power on the 31st May 2019. The Reason was simple Saturn aspect by 3rd aspect on the sign Sagittarius at the time of the Oath on the 26th May 2014 and when Saturn reached this arc it gave favourable results for Modi. This Article was also Published in “THE EXPRESS STAR TELLER ‘  Magazine in 2020 .

When Saturn was in Capricorn  at 13 degrees on the 21st May 1991 22-10 hrs at the time of Assassination of Rajiv Gandhi  it was having aspect on the Sun in Libra at 14 degrees in the chart of the Assassination of Indira Gandhi another down fall of the Leader of Congress  took place. Now Transit Saturn will activate the 24-25 degrees of Capricorn and aspect the 24-25 degrees of Libra  In direct and retrograde motion  and may  further damage the image of BJP on Feb 27th , 24th Sept. and Around the 18th Nov. 2022. This Transit will be  Most Crucial  for Narendra Modi and the BJP. Even if Yogi becomes the Whistle Blower the Future is not very secure for BJP in Totality . There are no Authentic charts of the Politicians . Predictions on the basis of the Start of the elections taking the time as 8-00 am are also not very conducive since the Lagna Lord is Placed in the 12th house of Losses but in own sign and the 7th Lord of Oppositions is also in the 12th house. Both the Lagna aLord and the 7th Lord suffer losses. Hence even if Yogi Comes to Power he may not be able to make a big dent like the earlier elections. BJP and Modi Charts are weak in this regard . As far as Yogi is concerned  If we consider the Chart of Dec. 1972  then he is running the Dasha of Saturn-Saturn the Dasha of the 7th and the 8th Lord for Cancer ascendant and not very conducive more so the Saturn is placed in the 8th house of the D10 chart showing struggles to come back to power . The Oppositions are also weak . Hence both suffer a loss in the Present and future scenario. Taking a Positive Perspective Yogi may come back to Power with very thin margin. The Transit of Mars in the 7th house shows lot of Political Trauma as already predicted and you can see for self what is happening. This also indicates the Predictions by the Foundation chart may prove for the Elections.

The Transit of Saturn in the sensitive arc 24-25 degrees in Capricorn aspects the sign Libra at the same degrees at the time of the First win of N Modi may bring agony and Pain for N Modi and the BJP on the Dates around 27th Feb, 24th Sept. and 18th Nov. 2022——– Note My Predictions as per the Following . When Retrograde and Fallen it may prove crucial for the BJP and N Modi.

27th Feb.2022 to 10th-11th March 2022 Since Saturn in Direct motion at 25 degrees  Good For BJP to  some extent  to come back in the UP Elections. Before this they will bring good Budget on the 1st Feb. 2022 just before the Elections Since Saturn will be around the 24-25 degrees  The Stock Market may also surge high during this time frame .

24th Sept to 24th Oct 2022 Most Venomous Period for Narendra Modi and the BJP and also the Country . Saturn will be in most malefic state Fallen and Retrograde in the 24-25 degree arc in the Capricorn Zodiac

HENCE FROM THE ABOVE IT SEEMS THAT THERE MAY NOT BE CLEAN SWEEP BY BJP THE PARTY IN POWER NOW AND DIFFICULTIES AND OBSTACLES IN REACHING THE VICTORY. TAKING A POSITIVE STANCE MAY COME WITH THIN MARGIN IF THE DEC. 1972 CHART HOLDS GOOD.

BJP MAY LOOSE IN THE ASSEMBLY ELECTIONS AS PER THE FOUNDATION CHART DISCUSSED LONG BACK ON MY WEBPAGE  AND AS PER THE ABOVE PREDICTIONS.

AS PER THE MUHURAT CHART FOR WHICH TIME OF ELECTIONS IS NOT CONFIRMED BJP MAY GET BETTER RESULTS AND WIN BY A THIN MARGIN.

AS PER THE SOLAR INGRESS CHART OF THE CAPRICORN THE RULING PARTY IS SIGNIFIED BY THE LAGNA  AND THE OPPOSITION BY THE 7TH HOUSE  AND 7TH HOUSE IS STRONGER THEN THE LAGNA LORD VENUS AND VENUS WILL BE IN AFFLICTION FOR A LONG TIME WITH MARS IN PLANETARY WAR  EVEN ON THE DAY OF THE DAY OF THE ELECTIONS AND THE  RESULTS  ON 10TH MARCH 2022.

NOTE THESE PREDICTIONS SINCE NO AUTHENTIC CHARTS ARE AVAILABLE. BJP AND THE RULING GOVT. MAY FACE ISSUES NOW AND FROM JULY 2022 WHICH COULD BE  CRUCIAL.

Red Planet Mars Joins Sagittarius Fiery Sign 16th Jan. What It Has Up It's Sleeves For Virus & Stock Markets Till 27th Feb. 2022 ?